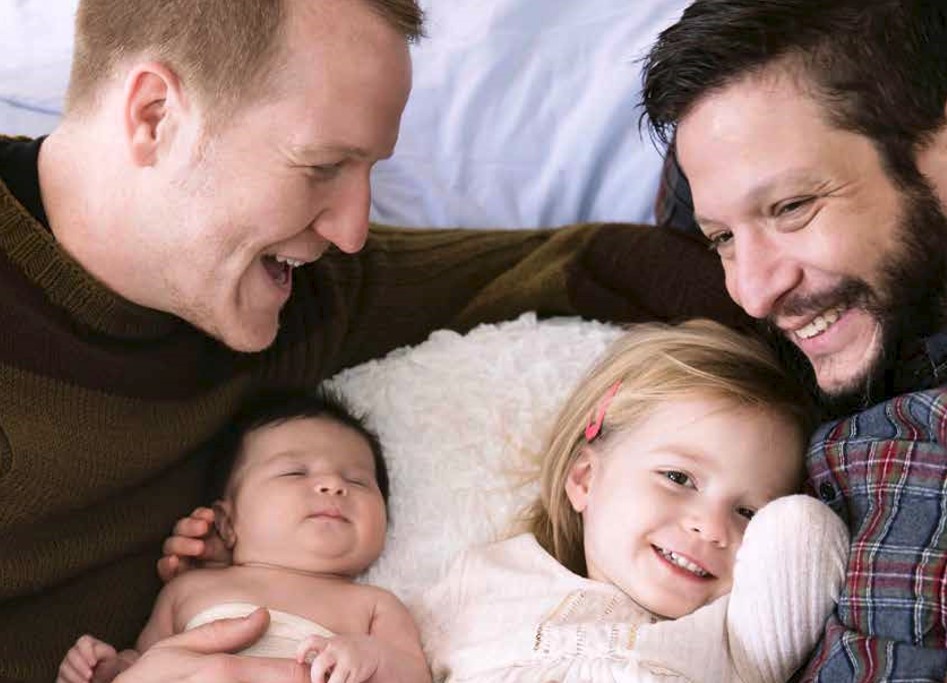 How long have you been together?

How did you meet?

We met on Grindr. It was Sunday, January 1, 2012 and I saw someone new and adorable show up on my screen. It was an unseasonably nice day, and Toby loves to bike, so he spent that day biking from the East Village where he lived to the West Village where I lived, looking for the best possible turkey burger. I opened with a one-word greeting: Cute. He wouldn’t meet up with me that day because he hadn’t yet found the turkey burger of his dreams, but we exchanged numbers, switched over to text message and scheduled a proper date for two nights later.

Did you both want children?

I’ve always wanted kids; I’ve long felt I was born to be a father. Toby was always open to the idea, but felt it would all depend on the person he ended up with.

How did you go about looking for the right egg donor/agency?

We started our entire surrogacy journey by attending a seminar given by Men Having Babies (menhavingbabies.org). We learned a tremendous amount there and met a number of service providers (egg donor agencies, surrogacy agencies, fertility clinics and family formation lawyers). Two things we learned early in the day were 1) that paid surrogacy isn’t legal in New York where we live, and B) that California is one of the most (if not the most) surrogacy-friendly state, particularly for gay couples because the laws make it relatively easy to get a “pre-birth order,” which is a judgement a couple can petition for before the birth of the child that allows both of the intended parents’ names to be entered onto the birth certificate, and not the surrogate’s name (meaning, both Toby and I were listed as the parents on both our daughters’ birth certificates from the get-go.) Based on all of that, and the fact that I am an L.A. native and we thought it would be nice to do everything local to my mom, so she could be more involved throughout the pregnancy (our daughters are her first two grandkids), we decided to focus our search on L.A. based service providers. Looking for an egg donor agency is not unlike signing up for a dating site. Once you complete a fairly basic sign-up form, you are given access to their databases, and can search for egg donors. Some of these databases are much more user-friendly than others, some have bigger selections of donors, and some provide more robust information. We felt the Beverly Hills Egg Donation (BHED) site delivered on all three. Toby and I decided to just take a look through some databases while on vacation in Fire Island, and on the Beverly Hills Egg Donation site, we found a donor that checked several of the boxes of what we were looking for, so we sent BHED a very preliminary email with some basic questions. Within minutes, Cheryl at BHED wrote back asking if we could jump on a Skype call with her right there and then, which impressed us, so we did. Cheryl ended up working very hard for us over the following weeks to match us with that very egg donor we found during that first search.

What are the common misconceptions about same sex parents?

I can only answer from our experience as a two-dad family, and the most com
mon misconception is that, as two men, we wouldn’t know what to do. Just one example that comes to mind is from one of our earliest flights with our first daughter. A woman sitting across the aisle from us asked if she could take the baby to get her to stop crying (we politely declined), and then the woman sitting on the other side of us said, “Oh it’s not that people think you’re incompetent; they just think you don’t know what you’re doing!”

How has having children affected your social life?

It may seem counterintuitive, but having children has actually increased our social life by quite a bit. All of our many friends from our lives before kids love spending time with us and our girls, probably on some level because time with us offers something new and unique (our girls have many “uncles”), plus we now have three new circles of friends—families with similarly aged kids from our neighborhood, families from our older daughter’s school, and a group of same-sex parents with similarly aged kids who live near us that we found online when we were pregnant with our first daughter. This last group makes a point of meeting up every couple months, so we’ve seen each other’s kids grow up, and we are excited that our kids will have a group of friends who also have same-sex parents.

For readers interested in the process—what advice would you give them?

Attend a Men Having Babies event if you can, and I also recommend finding service providers who are gay themselves if possible; that’s not as important on the egg donor agency side (where the relationship between the agency and the egg donors is the most important), but we worked with a different surrogacy agency for each pregnancy, and it was a huge difference (for the better) to work with a surrogacy agency that is gay owned and operated on our second pregnancy (the L.A.-based Same Love Surrogacy, who we highly recommend). The surrogacy industry was built first for straight couples with fertility issues, but there are several difference between that situation and ours. Working with Same Love Surrogacy on our second pregnancy, and with Dr. Guy Ringler at California Fertility Partners on both of our pregnancies (he is a gay father through surrogacy himself), we thought was a huge benefit when it came to having a true understanding of what the process was for us.

Go back to articles

Fertility Clinics We Have Worked with in 2017

In a traditional cycle, one recipient is matched with one donor for one cycle. If a successful pregnancy is not achieved and all normal embryos have been used, the recipient is eligible for a second cycle with no agency fee.

In a shared cycle, two or more recipients will share eggs from one cycle with one donor at one clinic. Each recipient pays an agency fee and legal fees. Shared expenses include donor fee, donor insurance, and donor travel (if applicable). Medical expenses are determined by the clinic. This option is not subject to our free rematch policy unless specifically outlined in the agency agreement.

We work with some clinics that offer frozen eggs. The donor choices are limited. If you are interested in frozen eggs, please contact us. This option is not subject to our free rematch policy.